The only thing that might make this face-off better is to snack on various no-name brand munchies while watching them. 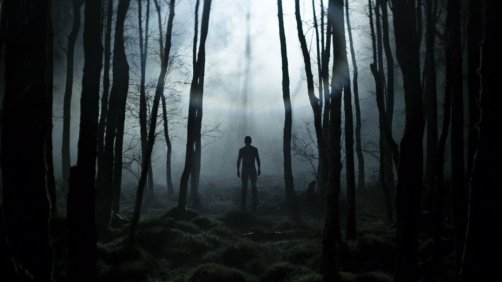 This film is about a surveyor who works on measuring a gorgeous, Irish forest with his lover-assistant while staying at a cabin on the land. The shots of the forest and trees were stunning each time, and if the entire movie was just the camera moving through that forest, I wouldn’t be upset. It’s artsy, it’s earthy, and it has something to say. It makes me want to open my windows and breathe the air of the trees. I mean, I live in the city so it’s only like, five trees on this block, but that’s okay. The problem with the film is that the second half is so dreamy with vivid images and murky with hallucinations that it’s difficult to really remember anything exactly when the movie is over. This is more of a visual trip than a horror movie, but luckily, I’m into flashing tree lightning.

There’s a mom, who is sad and depressed, grieving for her deceased daughter. A call comes in, supposedly from the dearly departed, and the mother begins to question if her daughter is really dead, or if she is captured by a cult and the body belongs to another child. ‘The nameless’ are pretty much described as crazy angels, and they may have captured the daughter and are keeping her in this earth angel house. I’m not sure if it’s the script or the translation, but the lines are so awful it’s distracting enough to ruin the movie. There are a few stories going on, but none is too exciting, and the film just drags on until the nonsensical climax. I kept realizing as I went on, how much of this I had already fallen asleep to on the first attempt. Cloudy clues, retro slasher music, and needless repetition like the movie wishes it were a soap opera mini series. And the whole thing with the nipples… what’s up with that?? A ridiculous ending finally finishes off the film and leaves you only feeling relieved that it’s over. My favorite part of the whole movie was the creepy dude (pictured above) in the asylum talking in riddles. His blotchy skin patterns made the movie, in my opinion.

Without Name, without a doubt. Although I forgot what this movie was about and had to watch it a second time before reviewing it, the film was a lot easier to enjoy than The Nameless. Devoid of bad writing and dullness, Without Name is my Film Face-Off champion!